Is this year’s potential yield already set – no matter how good conditions are during the growing season? One of the major components of yield is bud fertility and this is highly influenced by sunlight and temperature during formation in the previous growing season. Jo Cowderoy asks the experts how understanding bud fruitfulness can steer management practices to maximise quality and yield.

Like many perennial plants, grapevine bud formation is a two-year process. Buds are initiated on the shoots in the first season, and these then produce shoots, and hopefully flowers, the next. Berries are a result of fruit set after flowering, so the number of flowers, or inflorescences, is key to vineyard crop yield.  The bud, known as a compound bud, forms in the leaf axils. The cells within the bud can develop into a tendril or inflorescence, in a process known as tissue differentiation and this is influenced by factors such as temperature and light, as well as availability of nutrients. There are three ‘buds’ within the compound bud – primary, secondary, and tertiary – but the primary and secondary are considered fruitful.

Crop yield is a factor of flower number, berry number and berry size – but most importantly bud fruitfulness and this is already determined before the season gets underway. “Bud fruitfulness is a measure of the underlying cropping potential of the vineyard. In the absence of reasonable fruitfulness, all the other components contributing to yield amount to very little impact,” explained Peter Hayes, Australia-based Viticulturist and Global Wine Industry Strategist, who has advised many UK vineyards over the years. “It’s generally considered that fruitfulness, that is the number of fruitful buds, contributes around 60% to variation in the final yield, with berry number 30% and berry size approximately 10%.

“Understanding fruitfulness and how it can vary season to season is important for growers,” explained Joel Jorgensen, viticulturist, and Managing Director at Vinescapes. “If the previous season was cool or if the renewal zone was shaded, then bud fruitfulness is likely to be low – so already potential yields are restricted before the season starts,” he added.

“In the case of low fruitfulness, achieving good crop yields is extremely difficult as the only way to then target good crops is to retain more shoots thus leading to poor canopy attributes such as shoot crowding and elevated disease risk,” commented Peter.

“Poor fruitfulness, even with good fruit-set conditions shall often leave the vine ‘under-cropped’ and likely to express considerable vigour in the absence of an adequate crop load; this can lead to further canopy shading, excessively long internodes, and continuing problems in generating good crop potential,” he added.

One way of assessing bud fruitfulness is by dissection of the dormant bud to reveal its potential number of clusters. “Provided that there is a number of years of data and the bud dissections are conducted properly, an assessment of bud fruitfulness, also known as bud fertility, will allow growers to see if bunch numbers and yield are likely to be higher or lower than normal,” explained Dr Greg Dunn, Head of Wine at Plumpton College, a leading expert on yield and its components as this was his area of research when Associate Professor at the University of Melbourne, Australia. “Also, it can tell you which buds along the cane are less fertile and, hence, whether you may be able to get away with the cheaper option of spur-pruning without too much yield loss. Bud dissections will also allow you to detect bud eating mites and primary bud necrosis – a physiological disorder that can reduce grapevine yields.

“Understanding which yield components are affecting yield the most – bunch number, berry numbers per bunch, berry size – will allow you to target the measures you collect to estimate yield and help you to understand how you might be able to manage yield,” added Greg.

The number of clusters for the year is set during the previous growing season and this is influenced by sunlight and heat, as well as the vines general health and nutrient status. “Cluster numbers vary from zero to about three, and buds that are developing in cool shady areas will have low cluster numbers,” commented Joel. “The development of clusters in the bud takes place around flowering, so it’s important to keep the renewal zone, the area for next year’s cane selection, open for maximum light and warmth – but making sure there is still enough leaf area for photosynthesis to provide the energy needed! Of course, events after bud burst, such as poor weather at flowering will affect yield, but an open renewal zone the previous year will at least help potential fruitfulness,” Joel added.

“Key factors influencing fruitfulness are temperature and sunlight incidence on the newly forming node areas of shoots in the previous spring and summer,” explained Peter. “Vine function including adequate supply of carbohydrate from an effective canopy, along with a balanced allocation of sugars from the canopy to the newly forming buds is also important; in very vigorous vines, new buds can suffer as the rapidly growing shoots demand such supplies of energy,” he added.

“I have long advocated the use of bud dissection to establish bud fruitfulness level and in the case of cane pruning, to define where buds are most fruitful,” commented Peter.

“Bud dissection is a good way of getting an early estimate of potential fruitfulness, to see the number of clusters forming,” agreed Joel. “You need to collect a representative sample of buds from the vineyard during the dormant season and the dissection process is tricky – it requires practice to identify the various structures, and the right equipment, but Vinescapes are looking at offering this service,” he added.

“It’s a specialised skill and can be labour intensive. I would only advise it if the grower were committed to doing it properly and building up a reliable data set over a number of seasons. Many big companies in other wine regions around the world routinely dissect buds,” commented Greg.

With an understanding of bud fruitfulness and its influence on potential yield, management practices in the vineyard can be adapted. According to Peter Hayes: “Growers can apply a deal of targeted management effort to influence fruitfulness.”

“As long as grapevines are not severely water stressed or suffering from a nutrient disorder, temperature and light around flowering affect the initiation and differentiation of ‘bunches’ inside buds. In the UK these things will be optimised by leaf plucking in the bunch zone and judicious hedging. Care must be taken around flowering, however, as removing actively photosynthesizing leaves can reduce fruit set,” commented Greg.

“Good light penetration into the bunch zone will increase the light and temperature that buds are exposed to. This will also reduce disease risk. However, it’s important to consider timing so as not to encourage secondary crop or reduce fruit set,” he added.

“A knowledge of potential fruitfulness would suggest that pruning strategy should change according to, primarily, seasonal drivers from the previous year – and not simply follow a routine approach,” explained Peter. “For cane pruning, the conditions experienced along the shoot can vary widely as the cane and its buds are laid down in the previous season; for example, cool cloudy early season conditions can lead to the lower 5-8 buds being poorly fruitful, so short pruning will already be severely limiting of crop potential. If it was known that maybe buds 8-10 were more fruitful because of a warmer period in late spring/early summer, effort could be made to prune longer – maybe a longer unilateral cane, rather than short bilateral, retain extra buds via an arched cane or even to simply leave extra canes,” he added.

Joel agreed: “If this was the case, I would leave more buds than usual during winter pruning and be mindful to select the best canes, as these are going to be more fruitful. It may be worth considering double guyot rather than single. However, if the previous year was good for bud development, then reducing the bud number at pruning may be necessary.

“If excess buds are left at winter pruning, then shoot thinning can always be carried out if needed to avoid excess shading, or cluster thinning later in the season to avoid overcropping.

“If there is a late spring frost and the primary shoots are damaged, then there is a possibility of a small crop from the secondary buds. Robust frost protection really helps, but as an insurance, I like to keep sacrificial canes where appropriate to retain a higher number of primary buds. This can deplete reserve energy so careful consideration must be given to nutrient status and the timing of sacrificial cane removal/tying down,” added Joel.

“Given that conditions across most of 2021 were cool and cloudy, it is inevitable that fruitfulness would be low,” commented Peter. “Nothing can really be done to recover yield potential at this stage as pruning decisions, overlaid on the low potential, have set the stage.

“However, for future management, such conditions should induce:

“I use the Sectormentor app to collect data and information for vineyard management and have linked it to our granular weather data from Sencrop or Trak365 to overlay real time growing degree days with grapevine phenology,” explained Joel. “I noticed that last year’s accumulated growing degree days at flowering were lower than average – it was indeed a cool season. Observing the vineyards that we manage it is noticeable that there are fewer clusters per shoot than usual this year so yields would have been lower than average due to this reduced fruitfulness per bud left at pruning – thankfully we were forearmed and left extra buds to make up for it and have since thinned back the unfruitful shoots.”

“We can manage some of the factors influencing fruitfulness such as keeping vines healthy, ensuring a good nutrient status, well managed healthy soil, adjusting crop levels, and also timing and extent of leaf removal – but sadly we can’t control the weather!” Joel concluded. 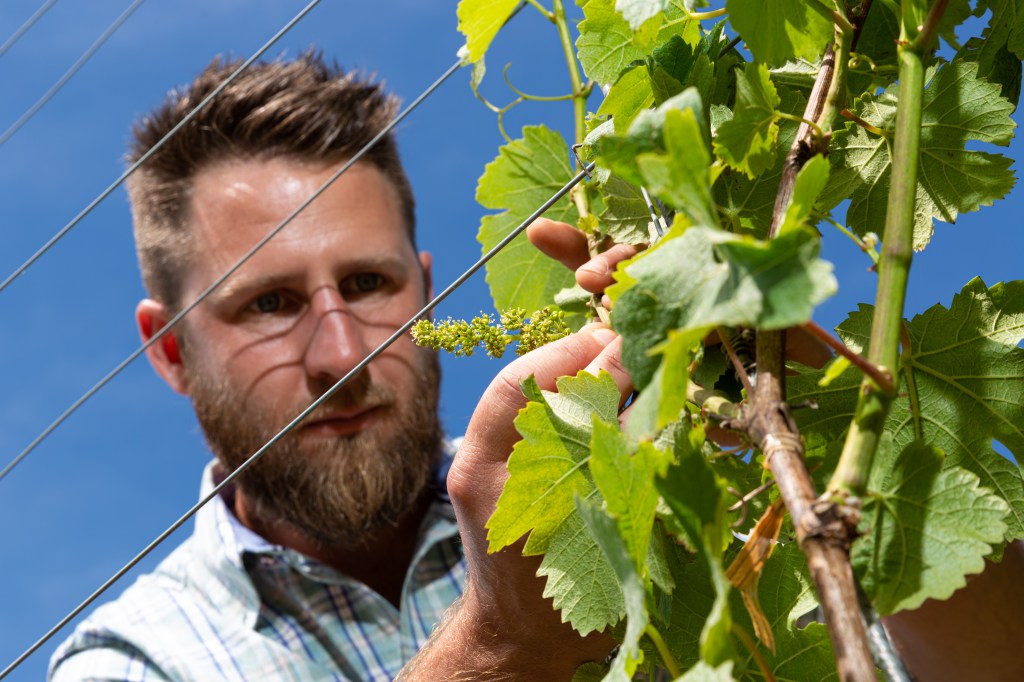 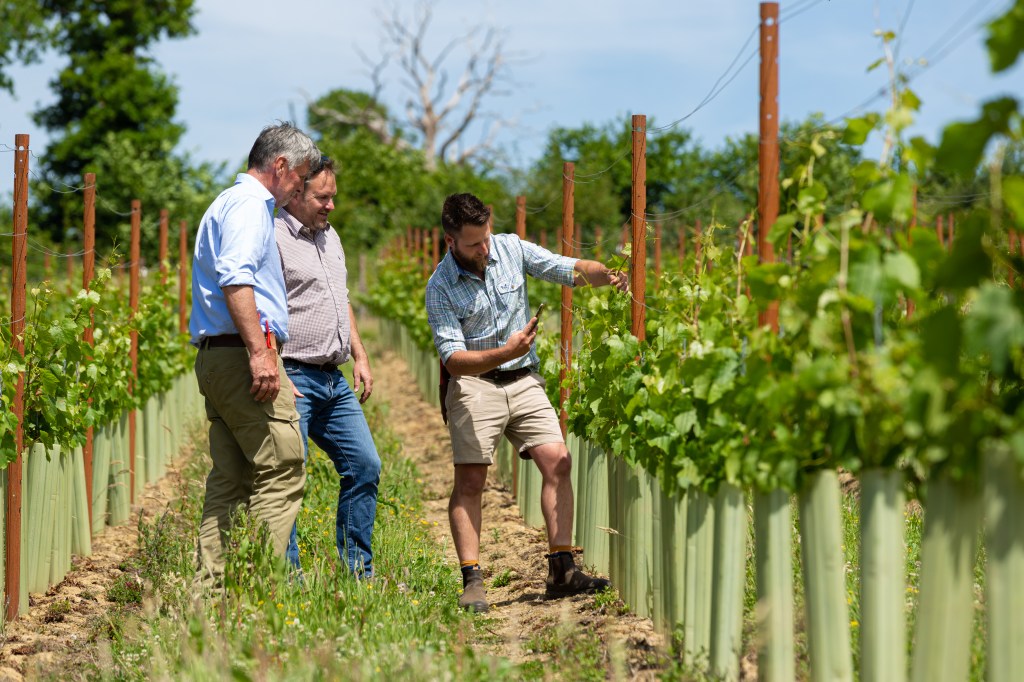 This website uses cookies to improve your experience while you navigate through the website. Out of these, the cookies that are categorized as necessary are stored on your browser as they are essential for the working of basic functionalities of the website. We also use third-party cookies that help us analyze and understand how you use this website. These cookies will be stored in your browser only with your consent. You also have the option to opt-out of these cookies. But opting out of some of these cookies may affect your browsing experience.
Necessary Always Enabled
Necessary cookies are absolutely essential for the website to function properly. This category only includes cookies that ensures basic functionalities and security features of the website. These cookies do not store any personal information.
Non-necessary
Any cookies that may not be particularly necessary for the website to function and is used specifically to collect user personal data via analytics, ads, other embedded contents are termed as non-necessary cookies. It is mandatory to procure user consent prior to running these cookies on your website.
SAVE & ACCEPT
Subscribe